WeCrashed is a mini series about the founding, growth, and downfall of the commercial real estate company WeWork.

My favorite scene shows the founder and his wife returning to the essence of WeWork in the wake of “lifeless” formalities. They are frustrated by the robotic quality of the S-1 document that’s needed to take their company public and decide to replace legal speak with words of passion that align with the company’s mission. To tap into the spirit of WeWork and discover new words, they throw papers, center themselves, and strike a gong inside the WeWork headquarters.

The scene starts at 32:11 in Episode 7. You can watch this scene by subscribing to Apple TV+. There is currently no official clip on YouTube.

The meaning of this scene is to not pander to people in positions of power or submit to traditional ways of doing business if they are not aligned with a mission that is positive in nature and responsible for making a company successful. You must find ways to uphold the spirit of a company’s mission during times of difficulty. To do this, you must seek to understand the point of view of people in positions of power and traditional ways of doing business. Adam and Rebekah do this by reviewing the S-1s of companies with successful IPOs. Then, you must create space for something better. Adam and Rebekah do this by centering themselves in the heart of the WeWork headquarters.

After joining a high-growth startup as an early employee, I published disruptive content that helped us attract iconic investors. But, as the company grew, so did formalities that subdued the spirit of the company. I challenged these formalities and my managers and HR turned against me. Was I crazy to think spirit had a place in high-growth business? No. But I was alone in thinking this. Even then, I knew spirit was worth advocating for and leaving a company for. Like Adam did at WeWork and like I did at that startup. True growth over topical business growth is what matters.

This is my fan version of the script. I wrote it to connect with the scene on another level and practice screenwriting. 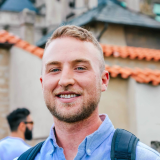